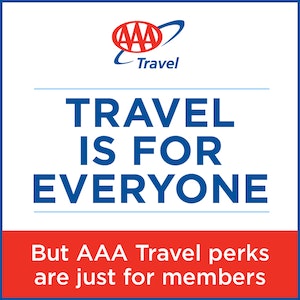 This soulful exploration of the American Frontier is filled with local encounters and natural wonders-from the wild Black Hills to Bryce Canyon's enchanting hoodoos and Crazy Horse to "Happy Pappy".
Call to Book 1-877-256-2450
Get a Quote View Dates Save for Later
Included With Your Trip
Additional Information

Embark on an epic encounter with the American Frontier. This evening, meet your Travel Director and fellow travellers for a Welcome Reception and then soar 550 feet above the center of the Las Vegas Strip on the High Roller, the world's tallest observation wheel. With sweeping 360-degree views of the Las Vegas Valley and The Strip you'll take in all the glitz and glamour.
Hotel: Harrah's Las Vegas

We leave the shimmering Sin City skyline behind as we journey to the canyons and towering cliffs of Zion National Park, following the footsteps of brave pioneers and first nation settlers. Then it's onward to the enchanting landscapes of Bryce Canyon. Admire its rusty red limestone spires that rise up surreally from the desert floor to meet Utah's skies.
Hotel: BW Plus Bryce Canyon Grand Hotel

Travel north to Utah's capital to see its Mormon centre - Temple Square in Salt Lake City. Learn about the basic beliefs and history of the Mormon pioneers which brought about the building of the temple and the Tabernacle, home of the Tabernacle Choir. This evening, enjoy an optional dinner at the Roof Restaurant, Utah's premier gourmet dining location.
Hotel: Sheraton Salt Lake City Hotel

Delve into the heritage of thousands of pioneers who braved the Oregon Trail, stopping in Montpelier at the Oregon Trail Center. Experience first-hand what life was like along a wagon trail heading west in the 1850s and enjoy lunch at a covered wagon-themed restaurant before departing to scenic Jackson. Admire the spectacular scenery at the foot of the icy peaks of the Grand Tetons as you spend an evening at leisure.
Hotel: The Lodge at Jackson Hole

Explore the rusting walls of the Grand Canyon of the Yellowstone, keeping a keen eye out for bison and elk, before joining your Travel Director for an exploration of the park's bubbling hot springs and mud paint pots. Old Faithful puts on an spectacular show as its water arcs impressively up into the air. And there amidst the geothermal wonderland, we enjoy a relaxed evening under the canopy of Yellowstone's stars.

Tip your Stetson in tribute to "Buffalo Bill" whose hometown of Cody is our next stop on this pioneer trail. Visit the Buffalo Bill Center of the West museum complex to gain a deeper understanding of the "Spirit of the American West". Then it's on to Big Sky Country where we'll 'Connect with Locals' in an effortlessly delivered encounter with "Happy Pappy" and some true Western hospitality.
Hotel: DoubleTree by Hilton Hotel Billings

Our day begins with a visit to Little Bighorn, the infamous battlefield where the ill-fated Custer led his men against a battalion of Sioux and Cheyenne warriors. Then, travel east through the Black Hills to Rapid City.
Hotel: The Rushmore

Venture into the Badlands and Black Hills of South Dakota. Drive through the magnificent natural landscape that paves your way to the base of Crazy Horse Memorial. Admire the colossal carved face of the famed Lakota war chief and learn how your visit 'Makes a Difference' by preserving Native American Culture. Visit Mount Rushmore to view the faces of former American presidents etched into the granite rock-face, then meet Stephen Yellowhawk in Rapid City and 'Dive into Culture' as you experience his tribe's history through dance and song during a festive Farewell Dinner.

Our foray through the American Frontier at its end, we say farewell to newfound friends and transfer to the Rapid City Regional Airport to return home.

For all offers, unless otherwise indicated: Rates quoted are accurate at time of publication to this site & are per person, based on double occupancy. Gratuities, transfers, excursions and, where applicable, airfare, taxes, fees & surcharges, are additional. Advertised rates do not include any applicable daily resort or facility fees payable directly to the hotel at check-out; such fee amounts will be advised at the time of booking. Rates, terms, conditions, availability, itinerary, government taxes, surcharges, deposit, payment, cancellation terms/conditions & policies subject to change without notice at any time. Cruise rates capacity controlled. Advance reservations through AAA Travel required to obtain Member Benefits & savings which may vary based on departure date. Rates may be subject to increase after full payment for increases in government-imposed taxes or fees and, except for air-inclusive offers, for supplier-imposed fees. Blackout dates & other restrictions may apply. As to Air-Inclusive Offers Only: Other restrictions may apply, including, but not limited to, baggage limitations & charges for first & second checked bag, standby policies & fees, non-refundable airline tickets, advance purchase requirements & supplier & airline itinerary change/cancellation fees up to & including the price of the fare per change plus any applicable fare differential (which may involve pre-notification deadlines). Supplier & airline fees & policies may vary; contact your supplier & ticketing airline for more information; for baggage fees & other details, see www.iflybags.com. Rates involving roundtrip air transportation for travel dates or from gateways other than those advertised may differ. Additional terms & conditions may apply; contact your AAA Travel Agent for more details. Site content provided by third-party suppliers. Not responsible for errors, inaccuracies or omissions. Automobile Club of Southern California acts as an agent for cruise & tour providers listed. CST 1016202-80.
Product Code: TTUSAS-DWFTRN15